Table sequences are universally used in esProc. During data analysis and computing, we often need to add records to a table sequence or delete them from it, or modify the data in it. This article will illustrate the modification and maintenance of the table sequences through operations of adding, deleting and modifying records, as well as of resetting a table sequence and adding fields to it. Meanwhile, it will introduce the different ways of handling these operations in a record sequence.

In the following cellset, append a record r1 to the table sequence in A1 and insert a record r2 at the second row. r1 is to set field values in order and r2 is to set field values by specifying field names. Finally, insert 3 records r3, r4 and r5 consecutively after the first row. Of the three records, ID field and NAME field have values while values of other fields are null:

The operations of adding records to the table sequence in A1 are performed successively in A2, A3 and A4. Click

in the tool bar to execute the code step by step and you will see the changes of the original table sequence as follows: 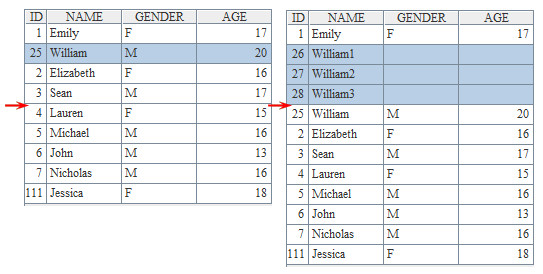 As can be seen from the above code, T.insert() function is always used to add records in a table sequence. It can specify positions for the records to be inserted, or set fields for new values. If fields haven’t been set, their values are null. 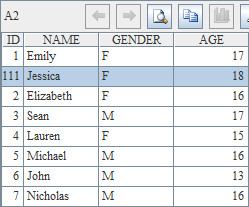 That the first parameter of insert function is 0 means appending records at the end of the original records. If not, insert the records in the specified positions. The rule applies to both table sequences and records sequences.

Let’s look at the case in a record sequence:

By checking the data in A1, you’ll find that the original data in the table sequence remain unchanged: 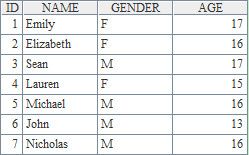 In the following cellset, first modify the GENDER field into Female and the NAME field into Violet in the second record; and then add 10 to each ID of the three consecutive records after the first:

The original data of the table sequence in A1 are the same as those in the above example. A2 and A3 modify the table sequence. After the code is executed step by step, you can see the changes of the data in A1:

It is forbidden to modify records in a record sequence. The modification must be performed in the original table sequence.

You can also modify the field values of a record into those of another record according to their positions:

Record pasting is the operation of modifying records using modify@r function. After the record pasting operation in A2 is executed, the fifth record in the table sequenc has been modified: 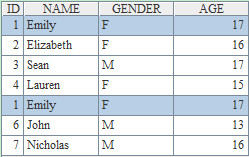 Using reset function, you can empty a table sequence while retaining its data structure:

The data are as follows after A2 adds new fields to the table sequence: